He served in the US Army for 25+, entering as a Private and retiring in 1986 in the rank of Lieutenant Colonel. During the Viet Nam War, he served two tours of duty; in 1968 with the 25th Infantry Division and 1970 with the 5th Special Forces Group (Airborne). Throughout his army career, he held command and staff positions at company, battalion, brigade, division and corps level commands. In addition to the units he served in during Viet Nam, he also served with the 82nd Airborne Division and ended his career with the XVIII Airborne Corps with the rank of Lieutenant Colonel.

Ham has served and held management positions in various civic and professional organizations. He is a member of Saint Paul United Methodist Church. He has served as President of the Methodist Men’s organization, Trustee membership, and on other committees.

In 2015, he was elected to the Goldsboro City Council to represent the 5th District. He served as Mayor Pro Tem in 2018 and was re-elected for a second term as a councilmember in 2019. In 2021, he was elected once more by his council colleagues as Mayor Pro Tem. In September 2021, he was elected by his council peers to assume the unfinished term of Mayor Chuck Allen who resigned due to illness. His current position as Mayor of Goldsboro will run through December 2023.
———-
He is married to Betty Duncan. They each have one child by previous marriage. 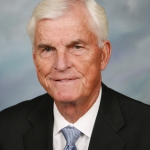