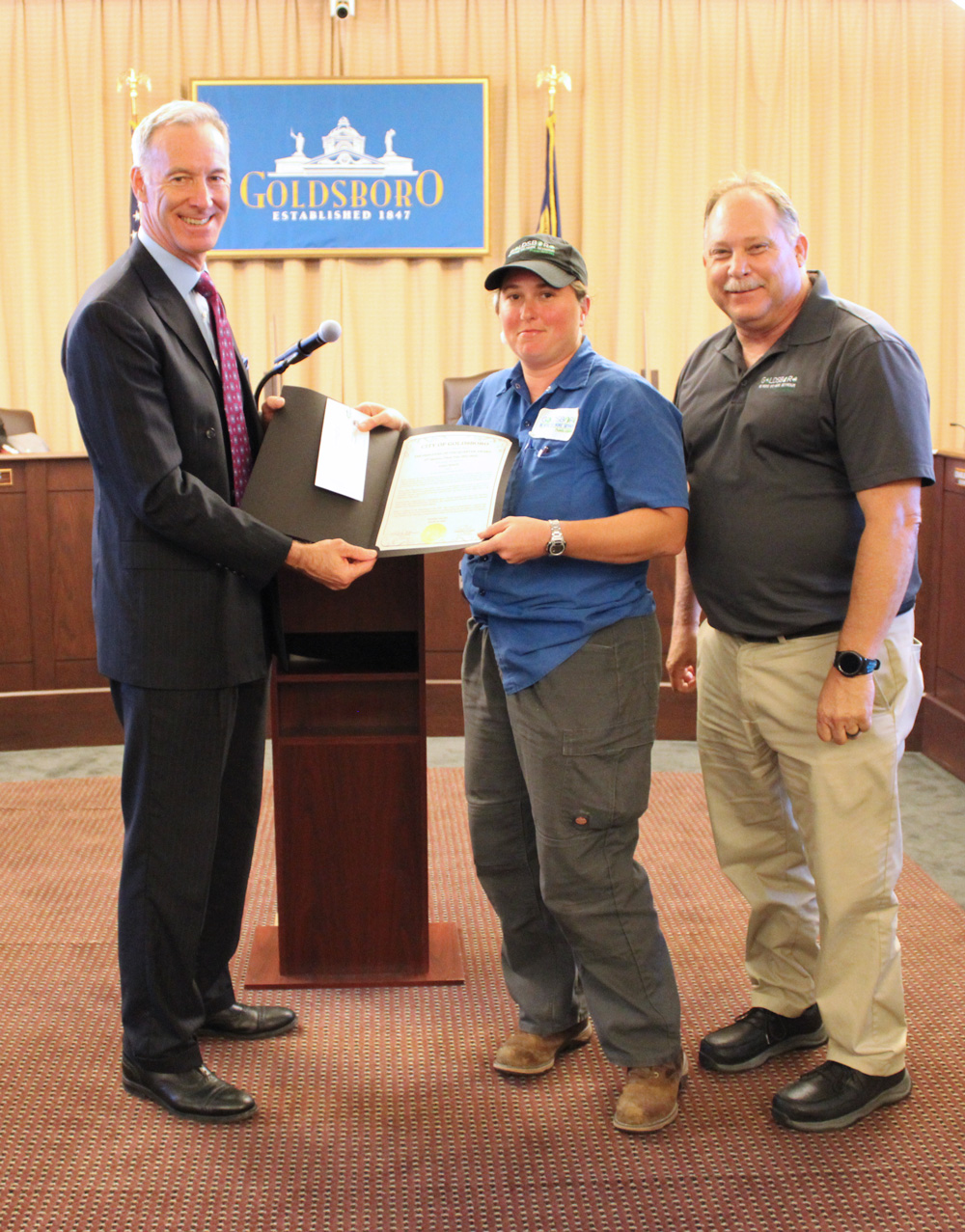 Kasey Morris – Employee of the Quarter 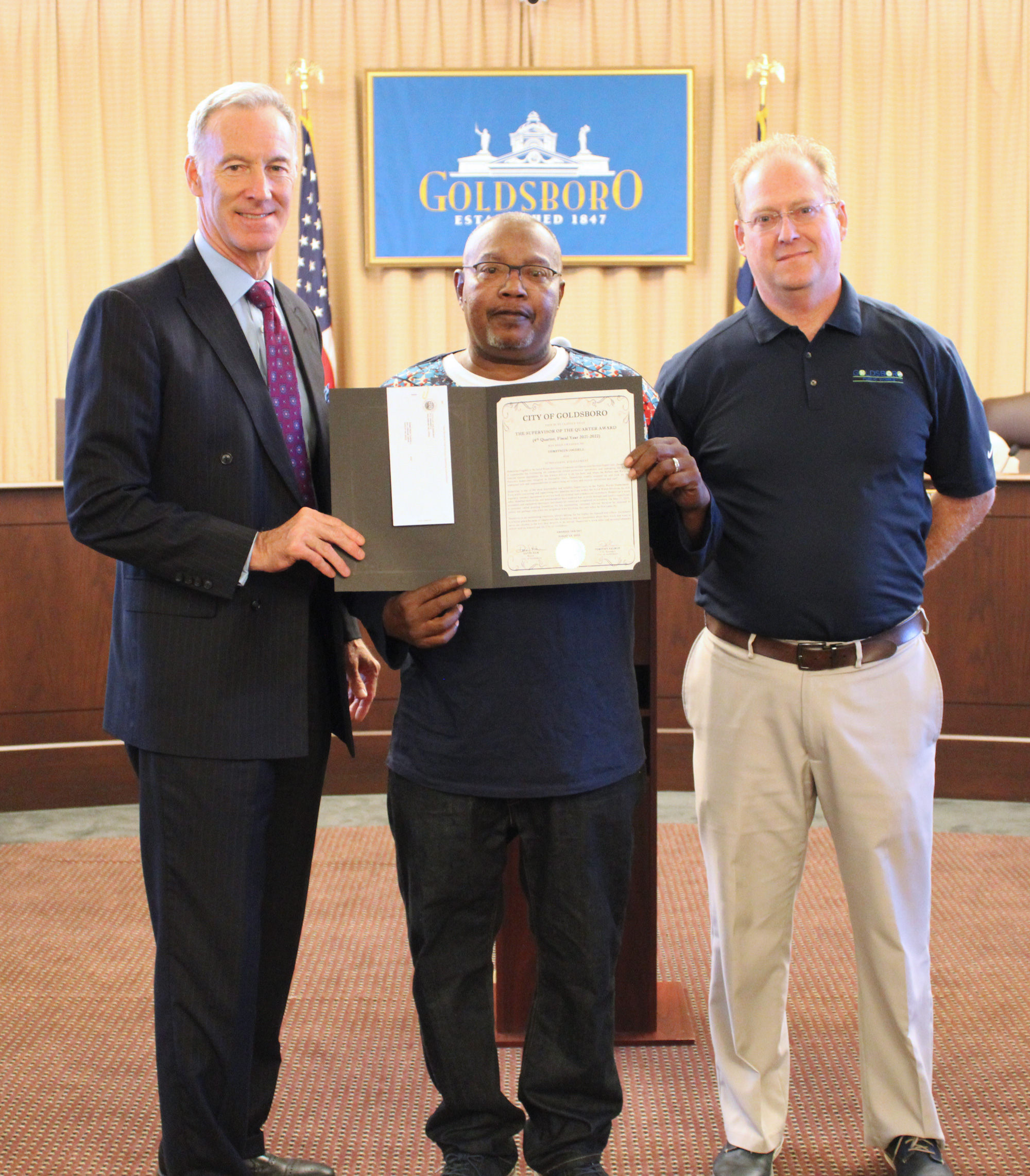 Demetrius Cogdell – Supervisor of the Quarter

_____
Kasey Morris operates the Water Reclamation Facility (WRF). Recently, Seymour Johnson Air Force Base accidently spilled firefighting foam into our sewer system, which could have been a huge problem, but Kasey drew on all of her training, and applied defoamer to the spill. She was able to divert the spill into pond No. 1 at the WRF, preventing any upsets to the tender biological system.

Kasey often volunteers to cover shifts when we are shorthanded, particularly in light of recent staff turnovers. Kasey also demonstrates an extraordinary ability to teach new employees. She is incredibly patient, and instills to the new staff to leave the plant in better shape than at the beginning of their shift.

Kasey recently compiled a list of equipment, parts, and part numbers from the WRF, Wetland, Spray Field, and Lift Stations into CityWorks. She stayed focused with this rather large task and handled it in a detailed and orderly fashion.

Kasey is integral to the functioning of the WRF. She exudes professionalism, integrity and customer-focus. Kasey is an outstanding employee, always setting the bar higher for herself and others. Kasey’s work ethic and accomplishments reflect well on herself and the City of Goldsboro.

Demetrius Cogdell is the Solid Waste Division’s Commercial Operations Section Supervisor. Demetrius is responsible for overseeing all commercial refuse collection operations and managing the City’s transfer station operations. He has always strived to do his best, and when the Refuse and Recycle Section’s Supervisor resigned in December 2021, Demetrius readily stepped up and took on the additional role and responsibilities of supervising all refuse and recycle operations and staff.

Demetrius is one of the most dependable and reliable Supervisors in the Public Works Department. Even while overseeing and supervising two separate sections within the Solid Waste Division, he still regularly operates equipment to service both residential and commercial customers. Demetrius’s work ethic, steadfast dedication, and determination have enabled him to work through and resolve significant personnel and equipment shortages, and ensure all routes are completed on schedule. On May 17, 2022, a customer called praising Demetrius for his outstanding customer service, because he returned to collect her garbage cans when her neighbors were blocking the cans when he first came by.

Demetrius is an outstanding employee, always setting the bar higher for himself and others. Goldsboro is a better place because of employees like Demetrius that are passionate about their work and want to serve our citizens in the way they deserve to be served. Demetrius’s work ethic and accomplishments reflect well on himself and the City of Goldsboro.

LaToya Henry2022-08-18T13:21:19-04:00
The city of Goldsboro is home of Seymour Johnson Air Force Base and the best barbecue in Eastern North Carolina. Goldsboro is a destination with rich history and heritage which captivates visitors and residents alike.