Goldsboro, N.C. — North Carolina Insurance Commissioner and State Fire Marshal Mike Causey announced that, after completing its routine inspection, the Goldsboro Fire Department received an ISO rating of 2 — an improvement from the previous rating of 3. The rating places the Goldsboro Fire Department in the top 5% of all fire districts in the United States and North Carolina.

“This is outstanding news, and I am so proud of the team effort to effectively illustrate the extent and quality of service provided by the Goldsboro Fire Department to our many customers,” said Fire Chief Joseph Dixon.

The inspection, conducted by officials with the Department of Insurance Office of State Fire Marshal (OSFM), is required on a regular basis as part of the North Carolina Response Rating System (NCRRS). Among other things, the routine inspections look for proper staffing levels, sufficient equipment, proper maintenance of equipment, communications capabilities and availability of a water source.

The NCRRS rating system ranges from one (highest) to 10 (not recognized as a certified fire department by the state), with most rural departments falling into the 9S category. While lower ratings do not necessarily indicate poor service, a higher rating does suggest that a department is overall better equipped to respond to fires in its district. Higher ratings can also significantly lower homeowners insurance rates in that fire district.

“I’d like to congratulate Chief Dixon for the department’s performance and for the hard work of all the department members,” said Commissioner Causey. “The citizens in the Town of these districts should rest easy knowing they have a fine group of firefighters protecting them and their property in case of an emergency.”

State law requires OSFM officials to inspect departments serving districts of 100,000 people or less, which makes up all but twelve of the state’s fire districts. 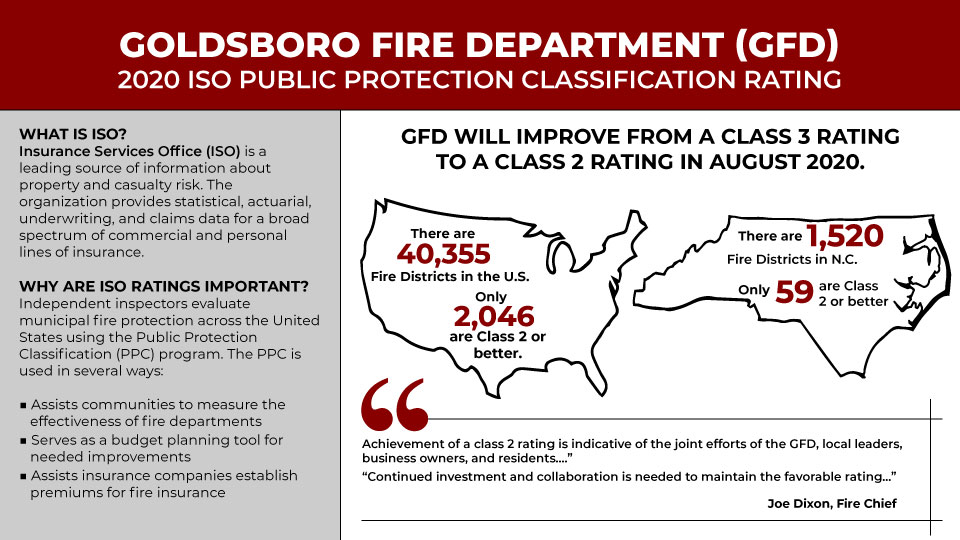 LaToya Henry2020-05-15T13:01:06-04:00
The city of Goldsboro is home of Seymour Johnson Air Force Base and the best barbecue in Eastern North Carolina. Goldsboro is a destination with rich history and heritage which captivates visitors and residents alike.