ATTENTION: CITIZENS OF DISTRICT 1
The City of Goldsboro operates under a council-manager form of government. The Goldsboro City
Council establishes the City’s policies and appoints the City Manager, who oversees day-to-day city
operations and executes Council-established laws and policies.

The Goldsboro City Council is soliciting individuals who are interested in filling the vacant
Councilmember seat for District 1, which occurred as a result of Antonio Williams being elected to serve
as a Commissioner on the Wayne County Board of Commissioners. The selected individual will serve for
the remainder of the term, until the winner of the November 7, 2023 election is sworn in. In accordance
with the City Charter and the laws of North Carolina, to be eligible to fill this vacancy, an individual
must:

1. Be a qualified voter in the City of Goldsboro.
2. Be at least 21 years of age and not adjudged a felon not having had their rights restored.
3. Currently live within the boundaries of District 1 and have done so for at least the past thirty (30)
days. (See map below.)

Interested citizens meeting these requirements can pick up the application form from the City Clerk’s
office at City Hall, 200 N. Center Street, Goldsboro, NC. Any potential applicant is encouraged to check
the District 1 boundaries while at City Hall to make sure they reside within District 1 before submitting
an application. Prospective applicants can also confirm their residency in one of the following ways:

1. Visit https://www.goldsboronc.gov/mayor-of-goldsboro/meet-the-city-council/ and search for
their address in the “Find My Councilmember” box at the top of the page or ask the Chatbot at
the bottom right of the page.
2. Text “What district am I in” to 919-580-4299 and provide address when prompted.
3. Call the Clerk’s Office at 919-580-4330.

Completed applications must be returned to the City Clerk’s office by 5:00 p.m. on Friday, January 15,
2021. Applications not received by that date will not be considered (placing it in the mail by then does not
constitute receipt by the City unless it is in the physical custody of the staff of the office of the City Clerk,
located within the City Manager and Mayor’s offices, 2nd floor, by 5:00 p.m. on Friday, January 15,
2021).

Please visit the City’s webpage at www.goldsboronc.gov or contact the City Clerk’s Office at 919-580-
4330 for more information. 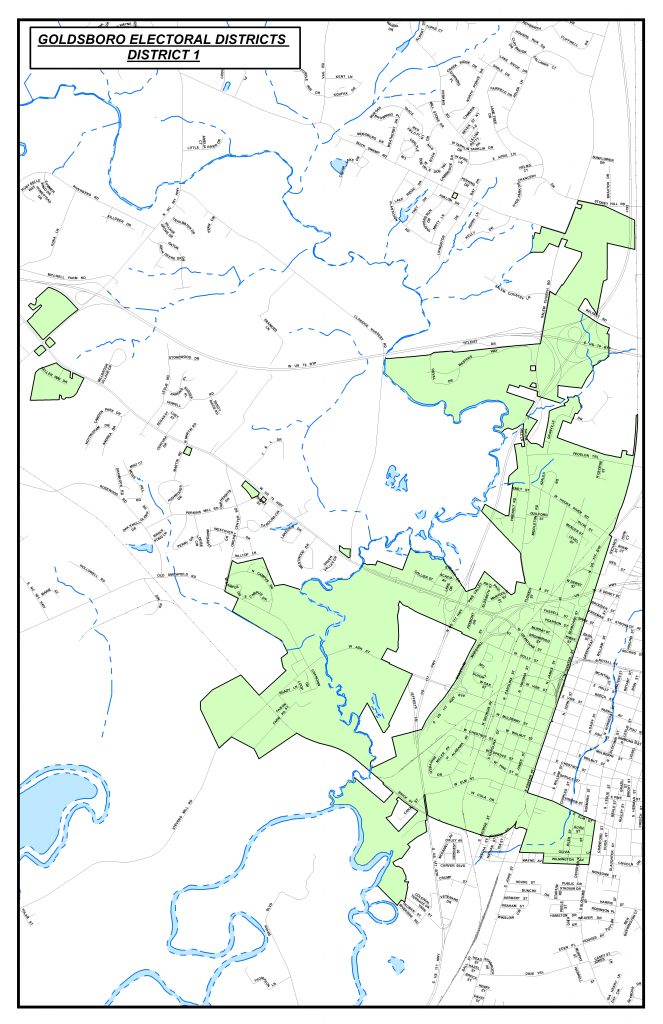 Coda
Hi I'm CoDa, the City's fully automated ChatBot. I know about our Council Members, phone numbers, trash and recycle schedules, job openings. Go ahead, ask me something.
LaToya Henry2021-01-10T10:34:18-05:00
The city of Goldsboro is home of Seymour Johnson Air Force Base and the best barbecue in Eastern North Carolina. Goldsboro is a destination with rich history and heritage which captivates visitors and residents alike.